The Italian Referendum: What should we expect after Sunday?


Ahead of Sunday's Referendum on Constitutional Reform, James L. Newell (IPSG Chair and Professor of Politics at the University of Salford) reflects on the crucial points of the reform, and future scenarios:


The Italian Referendum: What should we expect after Sunday?

James L. Newell
This coming Sunday, Italians go to the polls in a constitutional referendum. This has been widely dubbed as offering the stage for a third ‘popular revolt’ against the establishment following Brexit and the election of Donald Trump. Matteo Salvini, the leader of the right-wing populist Northern League, on receiving the news of Trump’s election was heard to exclaim: “Now its our turn!”
And the potential consequences of the referendum have often been painted in lurid colours with suggestions that it could bring the populist Five-star Movement (M5S) to power. The party has demanded a referendum on Italy’s membership of the euro. This could herald the break-up of the EU, it is said. On the left, it is pointed out that the proposed changes to the Constitution are massive. These, it is said, could lead to a reduction of political accountability and checks and balances that put in doubt Italy’s very status as a constitutional democracy.
The reality is much more prosaic and here’s why.
For one thing, the referendum won’t be a third revolt against ‘the establishment’ for the simple reason that it is very difficult to know who ‘the establishment’ is in this case. On the one hand, the reforms are being championed by Prime Minister Matteo Renzi’s Democratic Party (PD) and the moderate parties of the centre. On the other hand, they are being opposed by the parties of the centre right including Silvio Berlusconi’s Forza Italia. Lined up against the reforms are also a minority in the PD, the parties of the left and the populist M5S under former comedian Beppo Grillo. So is ‘the establishment’ Renzi, who is pushing for the reforms as part of the promise, which brought him to power, to do away with vested interests? Or is it the populist Berlusconi and his even-more-populist bed-fellow, Grillo, who are defending the constitutional status quo?

And what of the reforms themselves? The two most high-profile proposals are, first, a change to the constitutional status of the Senate. This is to be stripped of its equal law-making powers with the Chamber of Deputies and turned into a revising chamber. And it is to be indirectly elected from among regional councillors and mayors. This, it is said, will improve the speed and efficiency of policy making by putting a stop to the endless ‘ping-pong’ of bills between Chamber and Senate until they can agree on identically worded texts.
The truth is that the speed of law-making in Italy compares favourably with other countries. Problems only arise when the two bodies have different political majorities as happened due to the electoral law that was in force between 2005 and 2014.
And the reforms may bring no improvement because they replace the existing, identical powers, with a range of legislative procedures depending on the type of bill. Combine that with the differences in the ways members of the Chamber and the Senate are to be selected and you get the following. The two bodies may express different political majorities much of the time. So lack of clarity about what legislative procedure is to be used, when, may encourage Senators to use this as a form of filibustering and lead to much time-wasting litigation before the Constitutional Court.
Second, linked to the reforms is a change in the electoral law, which will give a majority bonus of 55% of the seats in the Chamber to the list that receives at least 40% of the votes. If no list achieves this, there will be a run-off ballot between the two most voted lists. The winner at this round will get the majority bonus; the remaining seats will be distributed among the losers. This, it is said, will increase the likelihood that a single party ends up with an overall majority. Thereby it will increase the power of the executive together with government stability. But there is nothing to stop parties fielding candidates as part of a single list with others – and then reclaiming their autonomy, in Parliament, after the election. Such has happened at every election in recent years. Parties know that they can unite with potential allies at election time and then go their separate ways afterwards simply by blackmailing them: “I might not be able to win, but by running independently, I can make sure you lose!”
In any case, executive stability and the efficiency of law-making are not the main problems. Italy’s problems lie not at the point at which legislation is made but at the points where it is implemented – in inefficiencies in the public administration and the judicial system, and in adequacies in adherence to rule-of-law principles.
What, then, of the likely outcome? There is little doubt that it will be close and in that respect comparisons with Brexit and Trump are appropriate. Polls put the No side ahead by about 5% – but many are undecided and the polls do not take account of the choices of Italians resident abroad of which there are about four million: a sizeable chunk of the electorate.
If Renzi wins, then his authority will go up and he might be tempted to capitalise on that through early elections.
But early elections will not be possible before legislation has been put in place to give effect to the way members of the new Senate are to be selected. And there will probably have to be further discussion of the electoral law for the Chamber as well. In September he was forced to agree to a parliamentary motion declaring a willingness to revisit it and it has been challenged before the Constitutional Court.
So the electoral law may not survive in its current form, and even if it does, the outcome of an election in 2017 and 2018 will probably be far less dramatic than is assumed. On current poll ratings, likely winners are the PD or the M5S. The significance one attributes to this depends on how cohesive one judges them to be and this will depend on future political developments. It is an open question whether an M5S that draws support from across the political spectrum and has hitherto been a party of protest, would be able to remain cohesive in face of the pressures of governing. Its experience of governing at the local level suggests doubt is in order. 17% of those the M5S elected to Parliament in 2013 have already defected. 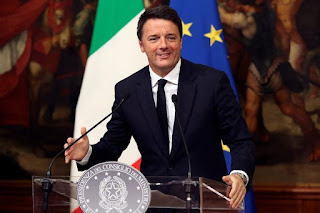 If Renzi loses, then having staked his future on the referendum outcome, he will probably resign. This will probably lead to the appointment of a technocratic government with the specific remit of securing parliamentary approval for a new electoral law, before the holding of fresh elections. I base this prediction on the thought that the legislature has only about fourteen months left to run; that for the parties such a government would represent a positive-sum outcome (none would win at the expense of others); that putting such a government in place would have the advantage of speed: assuming that a resignation on the part of Renzi sends shockwaves around Europe and the markets, President Sergio Matarella will want to resolve the crisis quickly.
So the day after the referendum result is announced, do not wake up expecting to find the world turned upside down. Whichever way it goes, it will be followed by a period of uncertainty. Here again comparisons with Brexit are appropriate. In the world of politics things are simply much more complex than journalists and politicians too often like to make out.